Not to be confused with the mushroom-like enemies also known as Bombers, Zirros.

The Bombers Secret Society of Justice is a gang of six boys who strive to do good in their home town of Clock Town in Majora's Mask.[1] Jim, their leader, wears a red bandanna, whereas the hideout guard wears a yellow bandanna and the rest wear blue ones. They are good friends with the astronomer in the Astral Observatory;[2] Link needs to befriend the gang in order to get to the observatory.[3] 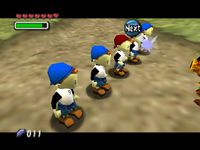 Five members of the Bombers

Prior to the events of Majora's Mask, the Bombers gang befriended the Skull Kid, but later cast him out due to his evil motives.[4] As a result, they only allow humans to join their gang,[5] provided that they can pass the test. Because of their previous affiliation with the Skull Kid, they also recognize Tatl and ask Link why is she with him, but only if the young hero is in Zora or Goron form.[6][7]

After popping the balloon Jim is firing at in North Clock Town, Link is challenged to a game of Hide-and-Seek.[8] The five Bombers can each be found during this game in the area of Clock Town they are normally located, save for one — while he is normally found in West Clock Town, he will be found in North Clock Town during the game of hide-and-seek. The Bombers hiding in East Clock Town will sometimes hide under one of the two crates near the Milk Bar. If the young hero can find and catch all five Bombers within the time limit, he will be awarded with the secret passcode to the Bombers' hideout and the Bombers' Notebook, provided that he is in Hylian form.[9] An alternative way to receive the Bombers' Notebook is to learn the passcode, rewind to the First Day, enter into their hideout, come back out and speak with Jim.[10]

In Majora's Mask 3D, the notebook is received from the Happy Mask Salesman, who found it after Skull Kid dropped it.[11] Also, the location of some Bombers was changed, with a member hiding in each of the five areas of Clock Town. Some of them now also hide under crates. Jim now also mentions that the usage of Deku Nuts is forbidden.[12] Despite this, there isn't any penalty on Link for using Deku Nuts in the hide-and-seek game.

Terminans in The Legend of Zelda series
Retrieved from "https://zelda.gamepedia.com/index.php?title=Bombers_Secret_Society_of_Justice&oldid=773814"
Categories:
Hidden categories: