The Underworld, is a recurring location in The Legend of Zelda series.[1][2] It usually serves as the home of Ganon and his minions.

In The Legend of Zelda, the Underworld can be accessed throughout various entrances scattered all over Hyrule that, upon entering, actually serve as the game's dungeons. In total, there are nine underworld entrances around the kingdom that Link must enter in order to retrieve a shard of the Triforce of Wisdom.[3][4]

Although the Underworld is not visited in The Adventure of Link, it is mentioned in the game's prologue where it says that Ganon's minions were calling up new monsters from the Underworld to work towards the revival of the evil wizard, implying that the Underworld is where the monsters actually originate.[2]

Ganon's lair in the Underworld

In The Legend of Zelda TV series, the Underworld is the home of Ganon and all of his underlings, and it is also where the Triforce of Power is located. The Underworld in the cartoon show seems to run underneath of all Hyrule since, instead of it being several separated labyrinths like in the original game, they all seem to connect. However, keeping with the original concept, it can still be accessed by several Underworld entrances hidden in the overworld. Some of these entrances are more accessible than others since some of them can only open or appear at Ganon's request.[5] However, others are at simple view that Link and Princess Zelda are free to go through: in "The Moblins are Revolting", Link mentions that there is an Underworld entrance right in North Castle's dungeon.[6]

Link and Princess Zelda continuously venture inside the Underworld via its many entrances throughout the show for various reasons, either to recover the Triforce of Wisdom from Ganon ("Cold Spells"), to obtain the remaining Triforce Shards that Vires stole ("Underworld Connections"), or to recover Link's body ("The Missing Link"). It is also worth to note that Ganon is able to teleport anywhere in the Underworld,[7] which he often uses to his advantage to immediately find where Link and Zelda are: in the "Underworld Connections" episode, Zelda asks Link that he not use his sword while in the Underworld since otherwise Ganon will figure out where they are.[8]

Ganon's Lair serves as the location of the Evil Jar as well as the Triforce of Power and seems to be located in a mountain deep in the Underworld. It is one of the major locations of the Underworld and is the section that is most visited throughout the TV series. Moreover, Ganon summons his minions from here and commands them to play out his plan of either obtaining the Triforce of Wisdom or capturing Princess Zelda. On the sides of the lair are cages where Ganon keeps more monsters, such as Gohmas: in "Stinging a Stinger", the evil wizard commands Moblins to take Link, Zelda, and Sleezenose into one of the cages where a Gohma would dispose of them.[9]

The Pit Room[10] is an Underworld location appearing in the episode "Sing for the Unicorn". It is a small room with a slowly disappearing floor that apparently has an endless pit.[11] After Ganon captures King Harkinian, he places him in this room until Princess Zelda decides to surrender the kingdom of Hyrule and the Triforce of Wisdom.[11] Eventually, Sing and her unicorn rescue Harkinian from the Pit Room just as the floor completely disappears, saving the king from his doom.[12] 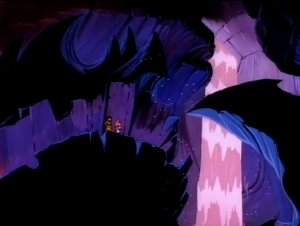 Link and Zelda at the Black Falls

The Black Falls[13] is one of the Underworld locations spoken of in the episode "Underworld Connections." It is here where one of the Triforce of Wisdom's shards is located; however, when Link dives in to find it, he stumbles upon an Aquamentus that promptly attacks him. The young hero then surfaces from the water while riding the monster,[14] giving Zelda a chance to throw a bomb at it to dispose of the foe and allow them to retrieve the Triforce shard.

The Bottomless Pit[15] is featured in the episode "The Moblins are Revolting." After one of the Moblins encases Ganon in an indestructible bubble using the Capture Staff, the Moblin pushes him inside the Bottomless Pit to prevent him from ever touching the Triforce and bursting the bubble. For most of the episode, Ganon is seen floating down the pit until he creates another bubble within that begins to make him rise and thus exit the Bottomless Pit.[16]

Like in previous appearances, the Underworld in the The Legend of Zelda comics by Valiant Comics serves as the home of Ganon and his minions. It is here where he keeps the Triforce of Power, and as such, he is his strongest when in this underground lair. Link and Princess Zelda venture into the Underworld several times throughout the comic, such as when Zelda goes into Level-1 to train against Ganon's monsters.[17] Like in the original game, the Underworld is the location of the Silver Arrow, which Zelda finds in Choices after defeating a Darknut.