Arrow Aimers are recurring objects in The Legend of Zelda series.[1] 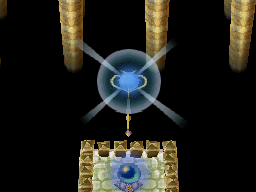 An Arrow Orb in use

Found in dungeons, an arrow orb's function is to redirect an arrow towards a determined direction when Link hits it with said arrow. The direction of the shot depends on the position of the curved golden pointer that surrounds the orb. When hit with a sword, boomerang or whip, the orb moves the pointer clockwise to a new direction. Sometimes this can be done to hit switches that unveil secret Treasure Chestss.

When an Arrow Orb is in use, the game shows the shot arrow's motion through a cutscene; this is done so that one can see what the arrow will hit in the end. It is possible to guide a shot arrow with multiple Arrow Orbs and, in Spirit Tracks, they can be carried by either Link or Princess Zelda to customize a new shot trajectory. This is important to solve otherwise impossible puzzles.

Arrow orbs can be found in the Temple of Courage and Mutoh's Temple (both in Phantom Hourglass), as well as the Fire Temple and the Tower of Spirits (both in Spirit Tracks).