Deku Tree's Success was a common term in the Zelda theorizing community referring to the uniting of the islands featured in The Wind Waker into a single land. This phrase comes from a quote in which the Great Deku Tree states that every year, the Koroks fly off and plant seeds that will grow into trees. He says that these trees will eventually cause all the islands of the Great Sea to be united into one land,[1] which some have speculated to be an incarnation of Hyrule in which other games of the The Legend of Zelda series take place.

The official timeline released in Hyrule Historia partly disproved this once-popular fan theory, as it established that none of the games released thus far take place in a land formed according to the Great Deku Tree's plan. It is still theoretically possible though, that this plan eventually comes to fruition at some point in the future. This theory once had a large amount of support in the theorizing community, and is preserved for historical reference.

Theorists who were in support of this theory pointed to several geographical occurrences as potential proof of the Deku Tree's success. 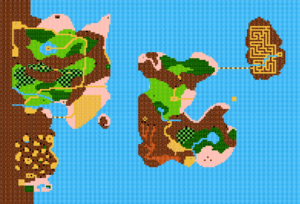 Despite Hyrule being described in A Link to the Past as a "beautiful land surrounded by forests and mountains", the Hyrule of The Adventure of Link is largely water-based. The map depicts Hyrule as a large western landmass with two medium-sized islands in the east. The game's manual also makes specific note of Hyrule's watery state over an extended period of time, as the tale of the hiding of the Triforce of Courage (said to happen long ago) denotes that it was hidden on "the largest island in Hyrule".

Labrynna's geography in the past compared to the present

When Link travels back in time in Oracle of Ages to a period 400 years before his time, there is considerably more water in the past than in the present. Several unnamed islands in the Zora Seas and Sea of Storms, as well as Crescent Island, have grown from past to present. Additionally, the island labyrinth in the Sea of No Return, which guarded the entrance to the eighth dungeon in the past, is completely absorbed by the mainland in the present, so that only its southern side borders water any more. Even that side extends farther out into the sea than it did in the past.

Oracle of Ages (as well as Oracle of Seasons) features an entity known as the Maku Tree, which some have speculated to be connected to the Deku Tree. Some theorize that the Maku Trees carried on the process which Wind Waker's Deku Tree began. 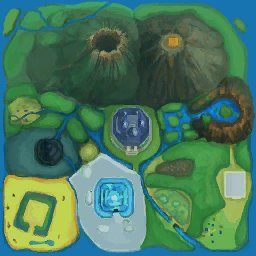 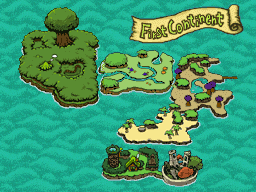 The spin-off game, Freshly-Picked Tingle's Rosy Rupeeland has an Overworld made up of three continents. Each one of these continents is composed of several large islands that are close enough to be connected by bridges. However, the timeframe and location of this game are unknown, as it is its canon status (as it was not developed by Nintendo).

Among the continents of the overworld are places with names that reference Hyrule, notably "Lon Lon Meadow" and "The Deku Forest". Though Hyrule is never mentioned by name in the game, and the map lacks any geographical connections to other games, this is believed by some to indicate the Deku Tree's Success leading to a New Hyrule resembling the old one.