This article or section is written like a story.
It uses overly elaborate and dramatized wording or has excessive plot elements not immediately relevant to the subject.
To meet Zelda Wiki's quality standards, it must be rewritten in a more encyclopedic manner.

The Ancient Battle is one of the earliest battles in Hyrule's history, and was originally depicted in the introductory cutscene of Skyward Sword.[1] The conflict erupted when the Demon King known as Demise broke out of the depths of the earth with his armies and attempted to steal the ultimate power from the goddess Hylia. The aftermath of the battle resulted in the creation of both Skyloft and the Sealed Grounds.

Creation of the World 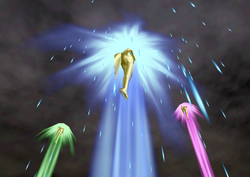 The Golden Goddesses at the time of Hyrule's creation.
(From left to right: Farore, Nayru, and Din)

According to lore, the world was created by the three Golden Goddesses: Din, Nayru, and Farore.[2] As they departed from their new creation, they left behind a symbol of their power in the form of the Triforce.[3] Being an artefact of divine origin, the Triforce was unsurprisingly imbued with great power, specifically in the form of reality-shaping and wish-granting abilities.[4] The Goddesses limited the use of the Triforce to mortals, supposedly as a means to inspire hope amongst them.[5] They left the relic under the protection of the goddess Hylia, ordering her to safeguard it and granting her the authority to preside over the realm they had created.[6]

Demise escapes from the depths of the earth to wage war on the Surface, in order to steal the Triforce from Hylia

For an unspecified period, Hylia ruled over the land that would come to be known as "the Surface," presiding over the various races that existed at that time. This era of peace ended when a fissure opened in the earth, from which came an army of demons led by their ruler, the Demon King Demise.[7] Demise sought to obtain the Triforce from Hylia and use it conquer the world, and to this end he ordered his armies to destroy all in their path.[8]

Skyloft is raised into the Sky by Hylia

Hylia, fearing for her people, gathered all the surviving Hylians on an outcropping of rock she cut away from the land around her temple that contained the Statue of the Goddess. Using her power, Hylia raised the newly-formed Isle of the Goddess into the Sky, sending it beyond the clouds to keep her people out of Demise's reach. This floating island along with others became the new home of the Hylians, which came to be known as Skyloft during the Era of the Sky.[9][10][11] She also created a cloud barrier to separate the realm of the Sky from the Surface and thus prevent Demise's armies from pursuing her people.[12] In secret, Hylia also sent the Triforce into the heavens with the Hylians, concealing the portals to its three parts within the hidden Sky Keep that was located beneath the Statue of the Goddess. Through Hylia's design, the way into the Sky Keep, and thus the road to the Triforce, would open when her chosen hero would come in need of it. She also secretly enshrined her sword inside the Statue of the Goddess to await the coming of her chosen hero. Her personal harp was also sent away with Skyloft to be used again one day when the need would arise.

The Goddess vs. The Demon King

Demise and his armies are defeated by Hylia

Once her people and the Triforce were safely beyond Demise's reach, the Goddess Hylia joined forces with the remaining races dwelling on the Surface and entered into a fierce battle with Demise and his army of demons.[13] It was said that Hylia had a chosen hero during this time that served and protected her from harm, and that she gave him her personal Sailcloth as a sign of honor.[14] Although only briefly mentioned in the game, Hylia's chosen hero plays a significant role in the Skyward Sword manga by Akira Himekawa. Though what truly happened to her chosen hero is unknown, his existence would continue to be known long after the end of his lifespan. After a long and bloody battle, Hylia succeeded in subduing Demise, driving him into a prison in the former location of the Statue of the Goddess from whence Skyloft was taken.[15] She cast him into this prison and placed a great seal on it meant to keep him locked away where he could do no further harm to the Surface or its inhabitants. With Demise locked away, the battle for control of the Surface was seemingly won and what remained of his armies were left scattered and dispersed across the land. Stripped of his true physical form due to the seal that now bound him, Demise was forced into the form of an abomination capable of great destruction should he ever escape from his new prison beneath what came to be known as the Sealed Grounds.[16] 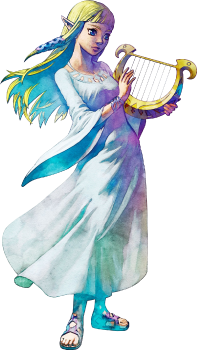 The Goddess Hylia reborn as Zelda

The Goddess Hylia had sustained grave injuries in her battle with Demise, and although he was now locked away beneath her realm, she knew the seal that bound him would not hold long against his great power.[17] She knew that if Demise freed himself from his prison, there would be no stopping him again from destroying the world and taking it for his own.[18] To prevent such a catastrophe from occurring, Hylia set two plans into motion.[19] First, Hylia created a sword spirit named Fi to be bound to the Goddess Sword that was now enshrined within the Statue of the Goddess. The Goddess created Fi specifically to assist her chosen hero on his journey to defend her in the future.[20] Second, Hylia decided to give up her immortal form and her divine powers so that her soul could be reborn as a mortal sometime in the distant future, thus allowing her to utilize the powers of the Triforce, which cannot be wielded by gods.[21]

Before voluntarily passing from the world, Hylia appointed a guardian dragon to watch over each of the three provinces of the Surface: Faron, Eldin, and Lanayru. She also appointed the great sky spirit Levias as warden of the skies. The Goddess divided the song that would open the way to the Sky Keep (and thus the Triforce) into four sections, entrusting one of each to the dragons and Levias so that they, in turn, could pass on their individual parts of the song to her chosen hero one day. She also stored her memories of her life as a goddess within two separate statues kept within the Skyview Spring and Earth Spring on the Surface, so that her reborn form could regain these memories in the future. Finally, the Goddess also created two powerful artifacts called the Gates of Time, a pair of magical gates capable of opening a doorway to the time when she had just sealed Demise away. These two gates, located in the Temple of Time and the Temple of Hylia, would be instrumental to the Goddess's reborn form and her chosen hero in the plan to rid the world of Demise. With this, the Goddess Hylia took leave of the world which she had protected since its inception. 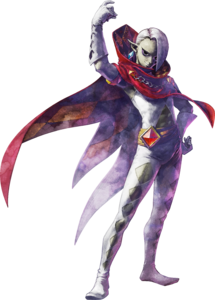 Thousands of years after the end of Hylia's battle with Demise and the Goddess's passing from the world, the people of Skyloft continued to believe that Hylia watched over and protected them from afar, unaware that she had actually been reborn and was living amongst them. The Goddess was reborn as the first incarnation of Zelda, daughter of Gaepora and best childhood friend of Link, the reincarnation of her chosen hero from ancient times. She would also come into possession of Hylia's harp from her father. It was at this time that the sword spirit tied to Demise's Sword, Ghirahim, enacted a scheme to seize possession of Zelda and use her divine soul to break the seal placed on his master.

The Demon Lord created a tornado to throw Zelda from the Sky and down to the Surface, where he could seize her. Link, in turn, discovers the Goddess Sword inside the Statue of the Goddess and, together with Fi, pursues Zelda, who evaded Ghirahim's grasp with the help of Impa, a Sheikah servant of Hylia.

Link would pursue Zelda across the Surface as she set out to find the two statues left behind by her former self. Eventually, Link is briefly reunited with Zelda and a younger Impa at the first Gate of Time in the Lanayru Desert's Temple of Time. Zelda transferred the Goddess's Harp to Link and fled with Impa through the Gate of Time, which was destroyed upon their departure to prevent Ghirahim from following. Link learns of the existence of the second Gate of Time in the Sealed Temple and goes on to reforge the Goddess Sword into the Master Sword by means of the three Sacred Flames hidden across the land to reactivate the dormant Gate of Time. At various times, Link encounters Demise, in the form of The Imprisoned, in battle, and repeatedly forces it back into confinement. 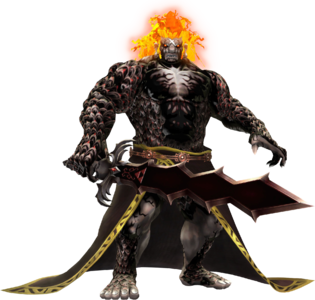 Eventually, Link succeeds in reactivating the second Gate of Time and journeys to the past to meet with Zelda, who reveals her identity as the mortal incarnation of Hylia and gives a final blessing to the Master Sword, transforming it to the True Master Sword. She then enters an age-long sleep inside the Temple of Hylia to keep Demise's seal strong for as long as possible.[22] In order for her to be able to wake up in their own time, Link is tasked with finding the Triforce and using its might to wish for the destruction of Demise, as he is one of the few who possesses an unbreakable spirit required to wield its full power. Link eventually succeeded in this endeavor, learning the four parts of the Song of the Hero from the dragons and Levias and opening the Sky Keep. Upon finding and wishing upon the Triforce for the destruction of the Demon King, the Isle of the Goddess broke away from the rest of Skyloft and returned to its original place in the Sealed Grounds, crushing The Imprisoned into oblivion.

Though Demise was vanquished in the present and Zelda awoke from her ancient slumber, an enraged Ghirahim seized her and took advantage of the Gate of Time to attempt to revive Demise in the past. Although Link succeeded in defeating Ghirahim and his hordes, the revival was complete as The Imprisoned swallowed Zelda's soul and returned to his original form as the Demon King Demise. Impressed by Link's bravery, Demise offered Link the chance to battle him for the fate of the world and Hylia's soul, only to be defeated by the Hero wielding the Master Sword. In his dying throes, the Demon King curses the goddess and her hero, stating that his hatred would be reborn as a being in the future, and would forever pursue the successors of Link and Zelda, so that they would never fully know peace.[23] Upon laying the Master Sword to rest in the Temple of Hylia and returning to their original time, Link and Zelda greeted the citizens of Skyloft, who began to take their first steps onto the Surface. Many years later, the descendants of Zelda would found the kingdom of Hyrule and become Hyrule's royal family.[24]