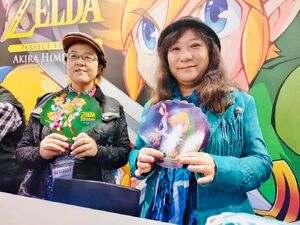 Akira Himekawa are the creators of one of The Legend of Zelda manga series.

Akira Himekawa is the collaboration of two women, A. Honda and S. Nagano. Their The Legend of Zelda manga series started with Ocarina of Time, released in 1999 in Japan. They have released manga for almost every main entry in the series. Their manga series include alternative storylines to the games, as well as new ones. These include a background story for Majora's Mask and the creation of new characters and races, such as the Watarara. A manga box set was released on October 25, 2011 including all their manga released up to Phantom Hourglass.

The Legend of Zelda Manga